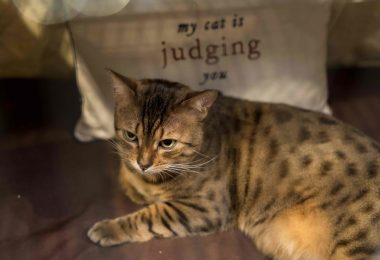 Cats are definitely among the most loveable creatures on earth. Although dogs are considered as man’s best friend, it is true that a cat is a social creature, as well. Despite the common belief that cats only stay with us beacuse we feed them, the truth is that a cat can actually be quite a soft creature. So, are cats capable of developing some strong relationships?

Cats are quite mysterious, independent and aloof creatures. They are definitely not a seasy to work with as dogs and they like to live their own independent lives. However, that doesn’t mean that cats are not social. On the contrary, it has been proved that cats prefer to interact with their owner instead of eating or playing around with a toy. In fact, cats adjust their whole behavior towards humans depending on the amount of love and attention a person gives them.

Cats are also, sensitive and soft creatures. They care about their owner’s mood and emotions and they can become attached to their beloved persons if given proper attention. Researchers have recently reported that a cat relationoship with her owner can be as strong and faithful as it happens with dogs or infants. Cats will normally try to get away from their home for a while, because they like to chase down other cats or just become isolated for a while but they will always find their way back to their owner’s hug.

The whole socialization period of cats typically begins at around 7-9 weeks of age. During that period, it is really important that kittens come in touch with other cats, pets and humans in order to become sociable and avoid fear and isolation. Kittens that have been close to humans during that period of their life are usually friendlier, more outgoing and less fearful of their environment as they grow up. Social play, including chasing, pawing, fighting, and biting typically begins at around the 4th week of age and it is also, crucial to developing a cat’s social nature.

Overall, cats are social creatures capable of developing relationships. Particularly with their owners they feel the security and safety they are in need of to put aside the fear of the unknown and develop some strong and mutual bonds. Despite what many of us used to believe, cats are not selfish or distant. They just need proper attention and a lot of love from the very start in order to trust you and stick around you for the whole duration of their life.

Unique Shorthair In case you are on the lookout for a continuing companion who will comply with you round and ...

Most cat homeowners really feel “in the dark” about their cats wants and needs. Here is 5 issues your feline ...

If you’re a cat proprietor, pay attention attentively. There are high three issues that cat house owners like it’s best ...